Coinciding with the feast of All Saints, Cementiris Barcelona this morning the new Information System Cemeteries (SIC), a new device for finding graves and services related to burial sites of the city. The act, in which also submitted the tombstones with QR code, has attended the Barcelona president Cemeteries and councilor for Environment and Sarria-Sant Gervasi Barcelona City Council, Joan Puigdollers, and general manager of Barcelona Cemeteries, Jordi Valmaña. 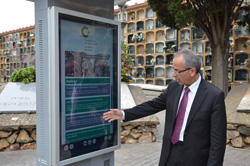 The SIC is an information system that facilitates user interaction. From the terminal, You can do a search for burial plan, access the services of the cemetery (cleaning headstones, selling flowers,…), web link to the public transport, find tourist proposals and meet the schedule of activities to cemeteries, inter alia.

Initially, SIC can be found installed in the cemetery of Les Corts, Poblenou and Sarrià and is expected in the second phase it is at the premises of Sant Andreu, Sants and Sant Gervasi.

At this event, Barcelona Cementiris also introduced gravestones with QR code. Scanning the code, the user can access various information about the deceased (videos, photographs, texts…). This digital memory may also include a map with the exact location within the cemetery niche. The QR code will be engraved on a plaque with the name of the deceased.

Barcelona Cementiris committed to using new technologies. This year, Poblenou Cemetery was the first enclosure around the state to use QR codes in their cultural route. Thanks to the popularity of this initiative, the system was extended to the route Montjuic Cemetery.

New service to scatter the ashes

With the will to respond to increased demand in cremations, CB offers a new service to scatter the ashes, Pack Natura, comprising a biodegradable urn, land made composting, which is accompanied by a small Mediterranean tree.

This new urn model born from the need to provide families with other types of spaces bury the ashes. Now, the facilities available in the cemeteries of Barcelona for this purpose are:

The Ash Recreation Forest Cemetery Collserola
The Memorial Cemetery in Collserola
The Garden of Rest of Montjuic and Collserola cemetery
The Ash Forest Recreation, Aromas Garden of the Mediterranean Garden and Cemetery of Montjuïc
The cinerary Columbarios various cemeteries (the burial sites have nearly 4.000 columbaria)
Thanks to the efforts of Barcelona Cementiris families get the ashes deposited in the cemetery, in the past three years, number
polls who stay in these areas has increased significantly, going from 20 % in 2006, nd to 30 % the 2011 (the 70 % remaining is given to families, who choose to keep the urn or home or scatter the ashes in specific locations).

3D plane to bring the cemetery to people with low vision

Cemeteries soon placed Barcelona to a 3D plane Poblenou cemetery in order to help people with low vision or blind to orient within the enclosure when they visit Cultural.

It is a flat embossed, textures, pictograms and drawings of specific elements that reproduces the physical space. Also includes text characters and contrasting visual and text embossed Braille.