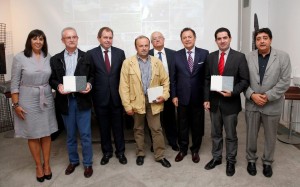 Funespaña, through the journal "Cultural Goodbye", will begin publishing in the first quarter of 2015 the "Route of Cemeteries Spain", just announced as the president of the company, Francisco Marco. The route will draw, at first, cemeteries participants in the first edition of the contest Cemeteries Spain, whose awards were presented yesterday to the mayors of the municipalities of Navarre Burguete and Roncal, and the mayor of Alcoy (Alicante), by self Francisco Marco, EVP Funespaña, Juan Valdivia, and CEO Alberto Ortiz.

Marco said that "municipalities and public corporations may make known the most interesting around them, natural spaces, monuments and historical notes ". "Since the president continued Funespaña- we have acquired as a commitment to normalize the concept of death as a party to the cycle of life, helping families through this time. The first edition of the competition Cemetery has become the most important event of the funeral industry and with it we wanted to recognize the historical interest, social, artistic and heritage of Spanish cemeteries, vindicate them as places full of life and memory of citizens. Venues to be preserved, raising awareness of important heritage citizenship housing and ensuring them not to be forgotten ".

Francisco Marco also announced that the call for the second edition of Cemeteries Spain will encourage competition with three new awards "for the best documented history related to the exhibition, the best initiative for disclosure of their assets and the best environmental initiative launched at the cemetery ".

During the ceremony, held in the art room Catfish Concept Madrid, present were former mayors of municipalities awarded. Mayor Burguete, José Irigaray, said yesterday after picking up the award for Best Cemetery for Spain to town "has been a recognition of the effort and work that the City Council for many years. Thanks for the contest, our cemetery is a tourist attraction because of the people ". Meanwhile the Councillor for Tourism of Alcoy, María Llopis, cemetery which won the award for Best Architectural Monument, He recalled that, when the result of the popular vote was met through the website of "Cultural Goodbye", the award meant "a recognition of the heritage value of the cemetery. The award is, clearly, a big boost to tourism promotion and Alcoy our cemetery tour inside the capital of the province of Alicante ".

For his part, Mayor Roncal, Alfredo Cabodevilla, He said the award mausoleum tenor Julián Gayarre Best Sculpture is very important to the town: "It is even more grateful for the fact that we are a small town in Navarra Pyrenees, only con 250 people. We competed with large cities and important works ".

Several members of the jury were present at the event and expressed the importance of it from different disciplines that are specialists, as anthropologist Mercedes Fernandez-Martorell, naturalist Dr. Joaquín Araujo and Art History, Ana Valtierra. It has also been jurors, journalist Nieves Concostrina; Jordi Valmaña, President of the Association of Municipal Cemeteries and Funeral Homes (AFCM); Gabino Abánades, advisor cemeteries Funespaña, and Antonio Flores, founder of the "We support the European Cemeteries Route" of the social network Facebook.